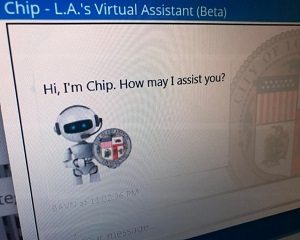 Microsoft is really pioneering some exciting technology right now! Earlier this week, Microsoft and the City of Los Angeles unveiled CHIP, an Azure Government chatbot whose name stands for “City Hall Internet Personality”. CHIP runs in the Microsoft cloud.  It resides on Los Angeles’s Business Assistance Virtual Network (BAVN), and was created by two city developers in just three days, with training from Microsoft and access to the Microsoft Cortana Intelligence Suite, the Azure Bot Framework, and Microsoft Azure Cloud.

Note: If you need more information about government chatbots, please visit our Complete Government Chatbots Guide which explains everything you need to know!

How CHIP Reduced Email Traffic By 50%

CHIP helps around 180 people per day and has slashed emails to BAVN from 80 a week to less than 40. This is a 50% reduction in emails that need to be handled by city employees, which should allow the city to get by with less staff. CHIP can answer over 700 questions, and through an extensible platform and API, can connect to any data or back-end system.

“CHIP is an anytime, anywhere resource to understand how to do business with the city,” said Los Angeles CIO Ted Ros. “When you have a city of over 4 million people it’s impossible to bring everyone into a football stadium all at once to talk to them. Technology is the platform in which we engage people.”

Cost was unexceptional. And despite freeing up staff to handle more involved issues, Chip is a harbinger of what’s next for artificial intelligence (AI), not a mere Azure Government chatbot, said Michael Donlan, Microsoft’s vice president of U.S. state and local government.

CHIP can be trained to “learn,” and has already been backloaded with knowledge more than tripling his answer base from around 200 to roughly 700 questions. He “curates” the answers from what he knows. An Azure Government chatbot can also easily connect to many different communication platforms like Facebook, Skype, Slack and websites. They also integrate with Microsoft Cognitive Services, allowing additional features like natural language processing, speech recognition, facial recognition, etc.

Just image what an Azure Government chatbot like CHIP could do for your federal or state/local government agency!

Is CHIP The Future of Government Services?

As discussed by Chris Bousquet in his article in Government Technology, there are five areas where governments have implemented or should begin to implement chatbots in order to improve the efficiency of service delivery:

In the U.K., Londoner and Stanford undergrad Joshua Browder created a chatbot to help recently-evicted residents apply for government housing. The premise was that people who have recently been kicked out of their homes may not be in a good position to write letters and gather information for a housing application. Browder’s service, available on the DoNotPay.co.uk site, asks users a number of questions via instant message, and then creates a legally-sound application designed to maximize applicants’ chances of finding housing.

The U.K has also seen innovative uses of chatbots in the realm of public health. Startup Babylon Health started a six month trial in January to use chatbots to replace the National Health Service’s (NHS) 111 service, through which residents call for advice on non-emergency medical matters. Thanks to Babylon’s mobile app, rather than speaking with operators who are not necessarily medically qualified, residents can message with chatbots to check their symptoms instantly and get advice on the appropriate course of action. The goal is for the chatbots to take care of simpler medical requests, allowing residents to avoid unnecessary doctors’ appointments and freeing up those physicians on call to tend to residents in greatest need.

While American cities do not have a comparable 111 system, building chatbots into public health efforts could greatly streamline services. Often, health departments have few physicians on call, creating a backup of residents with medical questions and leading to long waits. By integrating chatbots into health department websites and phone services, cities can create a medically-savvy service that can answer basic resident questions and allay concerns until a medical professional is available. For example, if a resident fears he has been exposed to an infectious disease, he could message a chatbot on the city’s public health website explaining the situation and symptoms and receiving guidance.

Perhaps the most notoriously slow and tedious of all government offices is the DMV. The average wait time at the DMV is 44 minutes, though in some cities typical waits can be as many as four hours long. Often, residents must wait to complete simple tasks like renewing their license plates.

Chatbots provide a much more efficient means of doing business with a city’s department of motor vehicles. By creating a bot that can complete tasks like renewing license plates or issuing parking permits, cities could allow residents to complete those tasks more quickly while simultaneously reducing congestion and improving speed of service in DMV offices.

Most 311 calls are simple information requests—questions about the hours of the public pool, what roads will be closed during an event, or some other piece of information. These are all questions that could easily be answered by a chatbot, either over the phone or via instant messaging. By having chatbots handle simpler requests, cities can free up call center workers to handle more complex citizen inquiries, providing better and faster service.

Chatbots provide another opportunity to grow citizen participation in government. By creating chatbot surveys that ask residents questions about policy issues, cities can gather more direct citizen feedback. For example, rather than encouraging residents to merely call their mayor’s office with concerns, cities could integrate chatbots into the city hall website or Facebook page to allow residents to voice opinions and then automatically ask follow-up questions to gather deeper, more useful input.

Would you like cFocus Software to create a FREE Azure Government chatbot proof of concept for you? Click the link below!